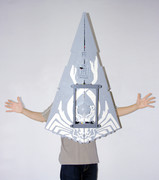 "The ISD Chimaera was a modified Imperial I-class Star Destroyer captained by Imperial officer Thrawn prior to the Galactic Civil War. It served as his command ship following his promotions to commodore, admiral and later Grand Admiral, transferring commands with him and eventually becoming the flagship of Grand Admiral Thrawn's Seventh Fleet. During the Liberation of Lothal, the Chimaera was pulled into hyperspace by purrgil summoned by the young rebel Ezra Bridger with Thrawn, Bridger, and most of its crew aboard.

The Chimaera was unique in that it had a stylized depiction of a chimaera engraved on the ventral side of its hull."
https://starwars.fandom.com/wiki/Chimaera
Sus